skip to main | skip to sidebar

These are houses I designed & built

Welcome to my Dollhouses page.
Enjoy your visit, and come again.

The first dollhouse I built from scratch was Miss Frobisher's Cottage. 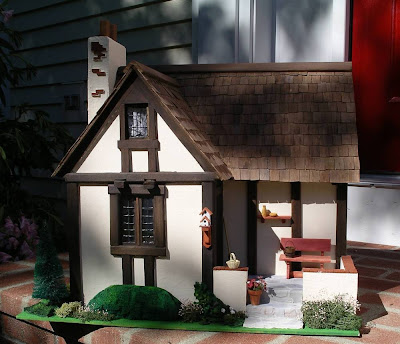 Here's a picture of Miss Frobisher in her kitchen. It was published in Dollhouse Miniatures Magazine together with some of my other photos a few years ago. 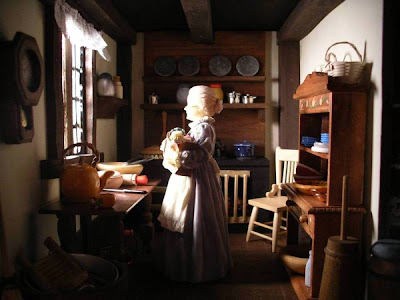 If you'd like to read a bit about Miss Frobisher's Cottage, and see more pictures, just click the link.

Dollhouses can sometimes aquire personalities of their own, even when they're only a glimmer in the back of your mind.
As I was finishing Miss Frobisher's Cottage, a vision of another house started forming in my head. I wound up calling it Tall Chimneys.
This is a picture of the kitchen of Tall Chimneys. The house is set in rural England in the mid 1800's. I made most of the furniture.

Here's a picture of the front of the house. Both of these photos were published in Dollhouse Miniatures Magazine. 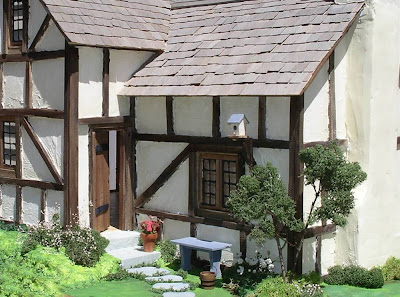 If you check the Tall Chimneys page, you'll find over 20 photos together with descriptions.

Another dollhouse, The Bungalow, seemed to take forever to build.
I like to add a nice garden to my dollhouses, and since it was late winter when I started landscaping the Bungalow, I think I got a bit carried away, but I was certainly pleased with the results. 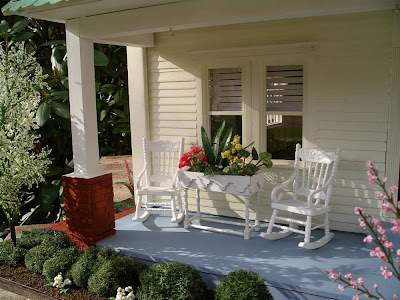 I wrote a series of dollhouse landscaping tutorials on the New England Miniatures Blog.
Below is a picture of the Bungalow kitchen. My real life kitchen has the same color walls and cabinets. 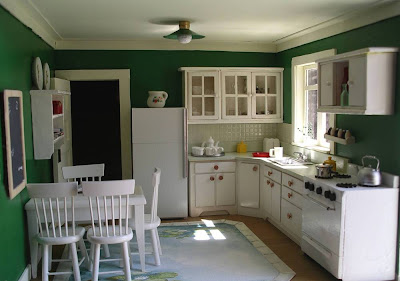 The Bungalow was featured in the Spanish miniatures magazine Miniaturas. Pictures of the Bungalow's dining room and bathroom miniature murals illustrated an article I wrote for the U.K.'s The Dolls'House Magazine.
You can see more pictures on The Bungalow page.

A tin of Christmas cookies was the inspiration for The Gnome's Cottage. 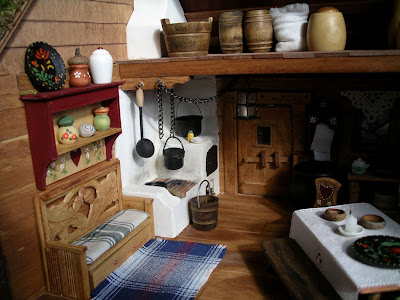 It's one room and a loft, with a nice little garden, all in a special gnomish scale. There are a lot more pictures on the Gnome's Cottage page.

Later someone asked me to build a version of the cottage for them, so I built Another Gnome's Cottage. 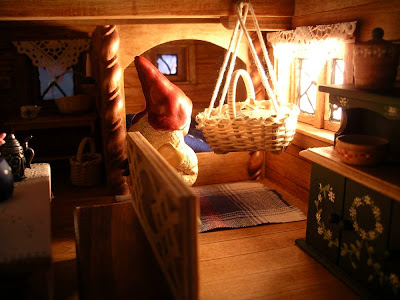 She had asked if I could include a cradle, so I came up with a swinging basket cradle that hung by the parents' bed.

A lot of miniaturists have seen the dollhouse potential of those hollow fake pumpkins that are sold for Halloween decorations. The Pumpkin House is my version. 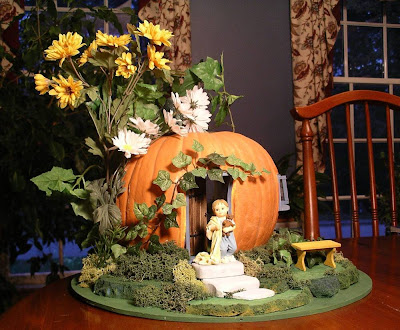 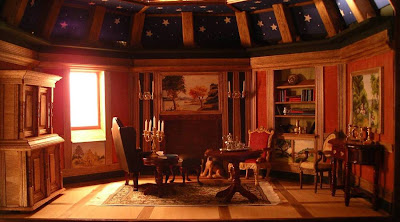 Now here's something I made some years ago, before I got into building dollhouses.
The picture was taken pre-D, or pre-digital, so it doesn't have the clarity of my other photos. 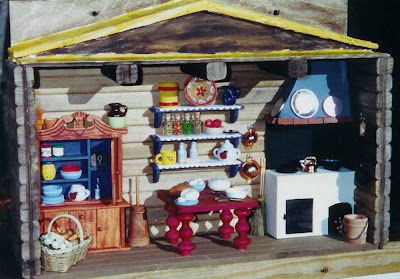 When I was a girl my mother had a cottage roombox that I loved to play with. She was forever warning me to be careful with it, and when, as an adult, I realized that I hadn't seen it since I was a girl, I assumed it had been played with once to often and broke. I have two younger sisters, you see.
One year I decided to build Mama's Kitchen, and gave it to mama for Christmas.
By the way, mama passed away last fall, and when my sister was going through the house, she found the kitchen I made and the original kitchen that I thought was broken. I now have both of them. You can see a picture of the original kitchen on the New England Miniatures blog.

The Nuthouse was built for a blog I wrote in conjunction with a building contest run by The Dolls' House Emporium in the U.K. They sent me a Gatehouse kit and asked me to do something with it and blog about it.
I had a great vision for the Gatehouse, when suddenly it changed into a tree stump house in which lived a little squirrel named Miss Nutkin.
Later I rewrote the blog, and you can read it, tutorials and all, on the Nuthouse page. 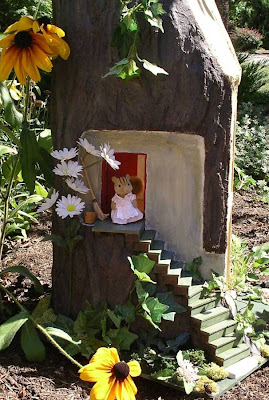 The final dollhouse on this page is a kit, the Duracraft Heritage. When my daughter was 10 or 11 (she's much older now), she wanted a Victorian dollhouse. I saw this kit for sale in a catalog and ordered it. Once it came, and I saw the photo of the interior, I knew there was a problem. The house didn't have room for a proper kitchen, and the space for a bathroom wasn't all that generous either. What's a mother to do? Build an addition, that's what! Later I learned this was called bashing. 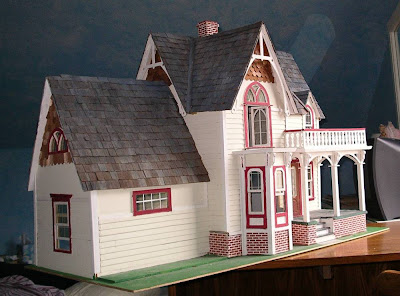 To see some more pictures of Ashley's Dollhouse, click the link. Someday I really should redo the inside, but Christmas was coming awfully fast that year. She was happy with it, which was the important thing.

I've finished some more projects since I first started this page, check the side links to see them.
Posted by Grazhina